A special carol service with a live nativity, traditional carols and readings.  Everyone is welcome, especially people living with dementia, their family, carers and friends. The service is followed by a festive afternoon tea.

A weekend of events starting with a Concert on Friday 30th November and ending with a Christingle Service on Sunday 2nd December.

See the poster below for details. 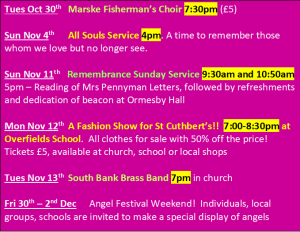 Charity Raffle: Fabulous prizes to be won at the show!

Shop your favourite High Street brands at 50% off or more!

This year’s Remembrance Sunday, 11th November 2018, will start with a Holy Communion Service at 9:30am followed by the traditional Act of Remembrance at 10:50am, which includes the laying of wreaths.

Later, at 5:00pm, in St Cuthbert’s Church and in conjunction with Ormesby Hall, we are having a reading of Mrs Pennyman’s letters. Refreshments (including a hog roast!) can be purchased at Ormesby Hall, followed by the dedication and lighting of a beacon at 7:00pm.

All ages are very welcome!

At 11:35am on Monday 5th November the Redcar branch of the Royal British Legion will be bringing Tommy the Silhouette to the Ormesby Memorial in the Churchyard. They will play the last post, having a minutes silence and then reveille. One stop on their visit to all the local War Memorials and Cenotaphs in Redcar and Clevalend.

The 2018 Harvest Festival Eucharist Service is at 10am on Sunday 14th October.
There is only one service this Sunday.

We are looking for individuals of all ages who would like to learn to ring the Church bells at St Cuthbert’s Ormesby. To that end we are holding an open evening on Thursday, 18th October 2018, at 7:30pm. Come along and see what’s involved. 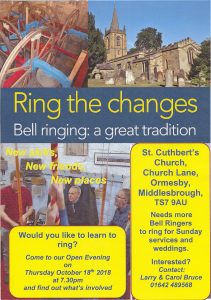 Tickets £3, in aid of Alzheimers and Cancer Research, at Guisborough Quoit Club, 35 Northgate, Guisborough TS14 6JP. Details on poster below, click on image to enlarge. 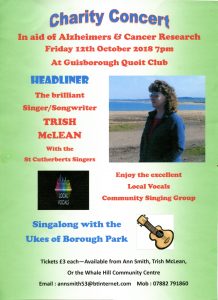 A group of bell-ringers from the Cleveland and North Yorkshire branch of the Yorkshire Association of Change Ringers are going to ring a quarter peal at 6pm on Friday 28th September and a full peal on Sunday 28th October to honour the sacrifice these men gave for their country. The quarter peal takes 45-50 minutes on the 8 bells at St Cuthbert’s and the full peal can last up to 3.5 hours as it involves over 5000 changes in the order the bells are rung.

The first peal took place in 2015, at St Mary’s, Whitby and the last will be at St Cuthbert’s, Ormesby, on 28 October 2018, in memory of Private Frank Brown, of the King’s Own Yorkshire Light Infantry, who died, aged 20, just before the Armistice.

More information about the quarter peal

More information about the peal