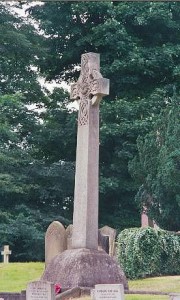 The Great War Memorial is a Celtic cross standing approximately 8 metres to the east of the church. It was originally described as standing on a knoll. In the mid 20th century the land between the cross and Ormesby Beck was in-filled so that it now looks down upon a gentler slope. It was designed by Hicks and Charlewood of Newcastle-Upon-Tyne. The stem bears the following inscription to the front:

The memorial was unveiled on Thursday 11th August 1921 by Captain (later Colonel) JWB Pennyman and dedicated by Rev JH Heigham, Hon CF. The names of the fallen, etched into the plinth, are no longer legible due to erosion.

The military Units of the men are as described on the framed memorial illuminated parchment in the chancel. They would be those that the men would have recognised, but are by no means all accurate or complete. For example ‘4th Yorks’ should be ‘4th Bn Alexandra, Princess of Wales Own (Yorkshire Regiment)’, later known as the ‘Green Howards’. Further information of those named above is available from the vicarage.